Words can hardly describe how excited I am to have the tour for Unafraid on the blog today. I love the Beachwood Bay series Unafraid was amazing! I have a review to share with you along with a giveaway.

~Synopsis~
"The first time I saw her, I knew this girl was wilder than any stallion I’d ever trained. She was headstrong, wounded, passionate and free. And I had to have her…"

Brittany Ray doesn’t care about her bad reputation. Growing up in a sleepy beach town with a junkie mom and a runaway dad, Brit’s learned the hard way that the people you love will only let you down. It’s no use hoping for love or happiness. Some dreams aren’t meant for girls like her.

Hunter Covington is one of those dreams.

Gorgeous, charming Hunter is damn near perfect—and it’s killing him. Son of royalty, he’s been trapped in a gilded cage since the day he was born. Now he’s breaking free. He’s quit law school to restore his grandpa’s old horse ranch, trying to soothe the demons in his soul. But is full of old ghosts, like the mysterious girl who spent an unforgettable night with him—and then slipped away before dawn. Brit.

Everything about her screams danger, but Hunter doesn’t care: he’s never felt a connection so deep. And try as she may, Brit can’t resist the desire consuming her —or the safety she finds in Hunter’s arms.

A reckless passion. An undeniable bond. Scarred by their pasts, Brit and Hunter fight to heal old wounds. But will dark secrets tear apart their new beginning? And when love is the biggest risk of all, can they find the courage to face the future unafraid? 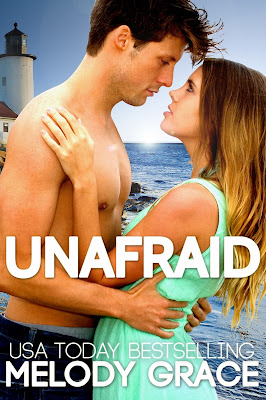 ~Prelude~
When I participated in the cover reveal for Unafraid, I knew I needed to read this series. I had been eyeing Unbroken for a while but hadn’t picked it up yet. When I saw that tour signups for Unafraid, I jumped on the chance to sign up and after being selected to participate, I decided to it was time to read Unbroken. Biggest mistake I ever made was not reading it sooner. As much as I loved Unbroken, Unafraid was even better.

I was definitely a fan of Melody Grace after reading Unbroken but now that I've read Unafraid, I am a fan club member for life. I absolutely love her writing and the characters she creates. The men are definitely swoon-worthy and the plot flows eloquently. Unafraid had everything that makes a great contemporary romance for me; likable female lead, sexy male counterpart, emotion inducing plot and steamy love scenes.

is briefly in Unbroken and she is Emerson’s younger sister so we know a little bit of her background going into Unafraid. She was abandoned by her father as a child and her mother was a junkie drunk. Living in a small town, everyone knows her past and she is clearly judged for it. This makes her angry and she acts out. My heart broke for because she has incredible dreams and so much potential but she doesn't see it in herself. She only sees what everyone in town perceives her to be; a townie slut. After hearing it whispered for so long, she lets herself start to believe it. When Hunter comes along, he doesn't allow her to see herself that way and for the first time, she sees so much more in herself. She is an incredible designer and she knows she has talent but no one will give her a chance. It is discouraging and causes insecurities within her. However, I loved that she never gave up even when the rejection was so painful for her.

“I want to lose myself in his arms right here, up above the world where nothing can touch us, and I’m safe from all the whispers of pain and doubt.”

Hunter seems like the perfect guy. Gorgeous, smart, successful and even though he comes from money, he is down to earth. It's obvious that he is hiding something important that causes him to see himself completely different. While Brittany sees the amazing guy that Hunter is, it kills him that she finds him so perfect because he know he has faults and he carries around the burden and guilt of those mistakes with him every day. He may come from money but his life is not picture perfect. His parents put so much pressure on him to live a life that he doesn’t want and Britney is the only person who sees the real person he is inside. She has no expectations from him to be anyone but who he really wants to be.

“I want so badly to live up to her illusions, be that man she sees in me, even if I can’t see it in myself just yet.”

The chemistry between these 2 is palpable and they definitely have some steamy moments of passion and lust. They both had demons that haunted them and when they came to a head, my heart broke for each of them. All of the guilt and anguish that Hunter felt was laid bare and I just wanted to hold him and comfort him. When was rejected in the worst possible way, I felt all of her emotions as if they were my own and as she poured it all out to Hunter, it was obvious that he wanted to take all of her pain away. What I loved most was that neither of them let these truths break them apart but instead pulled them closer together and allowed them to help each other heal and make on another whole again.

“To hell with my rules, and walls, and endless bitter defenses—I want him more than I want to stay safe. More than anything. More than air.”

We are introduced to Garrett in Unbroken a little bit and I loved seeing more of him in this book and getting to know him a little better. He is definitely a charmer but he was a really great friend to and he helped her through her tough times like a brother since Emerson is living in the city now. I'm hoping we get his story soon. Hunter’s mother on the other hand is a character I wish to never see again. She was haughty, rude and just plain cruel to . She treated her like trash and couldn’t accept Hunter’s decisions and choices. Despite the difference in social classes, was way above Mrs. Covington where it really mattered.

Hunter’s mother still had a hold on him and I got really pissed when he let her use her mind games to control him. I hated the way she used the guilt trip against him. However, I felt like he needed to be stronger and stand up to her. Every time she pouted, he crawled back in his shell and let her hold control over him. He allowed his mother to come between him and Brittany and when this happened I hurt for her so much because all of her fears were brought to the surface and Hunter didn’t do a great job at handling the situation. He broke and it was so painful to watch. However, part of enduring the pain is the pleasure when the characters make up because you know the male lead puts out all the stops and Hunter did not disappoint.

“She deserves everything. And I’m going to be the one to give it to her.”

I absolutely adore the way Melody writes her books. There is always so much emotion and depth to each story. Each character had these internal struggles that they fought tooth and nail to overcome and you can really feel these emotions with them. I love the way she includes flashbacks within the story and she always includes them in bits and pieces that are dangled in front of me and leave me begging for more. and Hunter’s flashbacks were included in the form of dreams they each had after spending time with one another and I found that was a really awesome and unique way to incorporate it. With all that said, I still feel like all the “feels” this book gave me are indescribable and I cannot wait for the next one. keeps getting better and better and I’ll never get enough.

Release day is tomorrow, August 27th. Come back buy and check out the release day post for purchase links!

About Melody Grace:
Melody Grace is the USA Today bestselling author of UNBROKEN and UNTOUCHED. A small-town girl turned SoCal beach-lover, she spent years with her nose in a book before deciding it was time to write them for herself. She loves bad boys, good books, and pistachio-flavored ice-cream.


To follow the rest of the tour, check out the tour schedule below:

*An eARC of this book was provided to me by the author and Inkslinger PR for a fair and honest review. All opinions expressed are my own and unbiased.*

Thanks Melody and Kelly!
Posted by Unknown at 12:30 AM