~Synopsis~
Nova Reed used to have dreams-of becoming a famous drummer, of marrying her true love. But all of that was taken away in an instant. Now she's getting by as best she can, though sometimes that means doing things the old Nova would never do. Things that are slowly eating away at her spirit. Every day blends into the next . . . until she meets Quinton Carter. His intense, honey brown eyes instantly draw her in, and he looks just about as broken as she feels inside.

Quinton once got a second chance at life-but he doesn't want it. The tattoos on his chest are a constant reminder of what he's done, what he's lost. He's sworn to never allow happiness into his life . . . but then beautiful, sweet Nova makes him smile. He knows he's too damaged to get close to her, yet she's the only one who can make him feel alive again. Quinton will have to decide: does he deserve to start over? Or should he pay for his past forever? 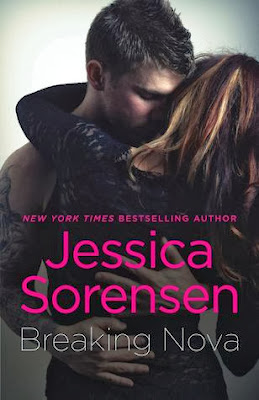 ~Prelude~
I absolutely love every book I have read from Jessica Sorensen so when I saw Breaking Nova was on NetGalley, I had to request a copy. I will definitely say that it is a bit different than anything of hers I’ve read and not at all what I was expecting. That isn’t a bad thing though.
~Review~

Breaking Nova was not a typical contemporary novel and it was definitely a little darker and depressing than I was expecting. I really did not anticipate the heart wrenching plot and the depth of anguish portrayed in the characters. This book is definitely not for the faint of heart.

Nova and Quinton have both suffered severe personal tragedies that have profoundly affected them and their lives. Both of them are simply just going through the motions of life but not really living. There is so much guilt, sadness and despair for both of them and I won’t lie, it was a bit depressing. Nova is trying to understand why and the unknowing is what drowns her in despair. I think she wants to move on and feel alive again but her experiences are difficult to handle and she doesn’t know how to find her way out of the hole she has fallen in. When she meets Quinton, she finds familiarity in him and this brings some relief to her constant sadness. Something inside her wants to help Quinton and draws her to him.

Quinton was once a great guy, loving life who wanted to go to college and didn’t believe in drugs. Now he carries around severe guilt and has no desire to continue living. He has turned to heavy pot use and alcohol to numb the pain inside of him. He moves from Seattle to Wyoming to live with his cousin and meets Nova. She makes him feel again and this both excites him and terrifies him at the same time. I really felt sad for him because I felt like he was tremendously hard on himself and I knew he was so much better than he gave himself credit for.

Quinton lives with his cousin Tristan and his friend Dylan, who is Nova’s friend Delilah’s boyfriend. Tristan is not really a spectacular character. I didn’t really have any connection with him one way or the other but Dylan was a complete douchebag and he only got worse as the story went on. He seems to be a small time drug dealer but he gets a lot worse by the end. I also hated the way he treated Delilah and felt like she was foolish for always running back to him and letting him treat her like that. In the beginning, it seems like she would be a good friend to Nova, trying to get her out of the house and back to living again. However, she showed her true colors and I was not impressed with her by the end.

I really thought that Nova and Quinton could help each other heal again and they seemed to really connect but Quinton carried too much sadness and guilt and Nova needed to heal herself before she could ever be able to help Quinton heal. I really felt Nova’s growth and the moment she realized she wanted to really live again was the highlight of the book for me. I loved when she realized that smoking pot won’t erase the pain, but only numbs it for a while and that she must heal herself. She makes the right choice by getting rid of the negative influences in her life trying some of the old things that used to make her happy again. Sadly, while Nova began to heal, Quinton only deteriorated and it made me really sad to see how much he spiraled downhill. I hope Nova can help him heal now that she has begun to heal herself.

Overall, I did really like this book but it was just a bit too depressing for me. While drug abuse doesn’t deter me from a book, I’m not really into plots with heavy drug use. Despite the heavy plotline and the drug usage, this book was written really well and it definitely did a great job discussing grief and loss. I’m looking forward to reading the next book and hoping it’s Quinton’s turn to find his way out of the darkness.
~IPOD Picks~
“Broken” by Lifehouse
"Flightless Bird” by Iron & Wine

*An eARC was provided to me by NetGalley and the publisher in exchange for a fair and honest review. All opinions expressed are my own and unbiased.*
Posted by Unknown at 12:00 AM