Today, I am excited to share the book blitz for Where My Heart Breaks by Ivy Sinclair with a guest post and giveaway on the blog.

~Synopsis~
If there were a course in screwing up your life, Kate Spivey would get an A+.Trust is in short supply for Kate at the start of the summer before her senior year of college. Her parents sentenced her to spend it under the watchful eye of her aunt at the famous Willoughby Inn. It was further proof that she was a prisoner in, and not the decision maker of, her life. Nothing she does is good enough to prove that she learned from the mistakes of her past.Almost immediately, Kate finds that her new summer home holds another person who understands the unfairness of her situation better than most. Reed Black has had his own share of tragedy and regrets, but instead of trying to fight his reputation, he embraced it.Sparks fly between Kate and Reed, but Kate needs to steer clear of Reed if she wants to regain control of her future. He is one temptation she can't afford to indulge in, although fate seems to have other ideas for both of them. 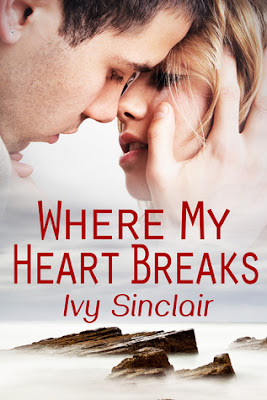 ~Guest Post: Ivy Sinclair~
If you are a fan of Stephen King or Quentin Tarantino, you may have noticed that they both seem to enjoy writing little parts for themselves into their movies. It’s always interesting for me to observe the roles that they chose for themselves inside the stories that they tell.

Recently, I realized that I inadvertently had done a similar thing while writing Where My Heart Breaks. My family and friends often ask me if I base any of my story characters on anyone in real life. The answer is usually no. (And even if it wasn’t, I don’t think I’d tell them.) In this instance though, I realized that isn’t completely true.

People who know me know that I have a thing for big, old houses. It’s an all-encompassing love affair to be honest. I drag my husband sightseeing to any and every historical mansion that I can find. Thank goodness he’s a good sport. There’s something about being able to feel like you can almost touch the past inside those houses that gets me every time. It amazes me to see how people lived before, especially those of privilege and wealth.

A common theme in many of the stories I write is that I’ll feature a location that is a big old mansion. Where My Heart Breaks is no exception. In it the fictional Willoughby Inn is brought to life. I describe this location as a southern style plantation home, just like the one you think about in the movies. (Imagine my disappointment when last summer, during a multi-plantation tour outside of Charleston, I found out that type of home in the old South was a myth propagated by Hollywood.)

Where My Heart Breaks is set in North Carolina, and so I was able to draw on local inspiration for the Willoughby Inn as well. The Biltmore, which is touted as America’s largest home, can be found in the foothills of the mountains in Asheville, NC. While the Willoughby Inn of my novel isn’t nearly as large as the Biltmore, the surrounding landscape did heavily influence it. The fictional towns of Bleckerville and Cheshire are located west of Asheville.

So here’s where I found myself after writing the book.

One thing that isn’t mentioned in the blurb is there is a story within a story woven into the plot. Readers will discover that the title of the book is actually based on a fictional book that was written by a man who was a guest at the Willoughby Inn one summer many years ago. His book became famous and is studied by Kate and Reed throughout the course of the novel. The author of that book I named Walter Moolen.

Walter Moolen clearly had a love of big, old houses and was inspired enough to write a story set in one of them. Just like me.

If Where My Heart Breaks were ever made into a movie, I’d ask the screenwriter to revise Walter Moolen’s character into a female role, and then that would be the small role I’d want to play. I figure I’d be a shoe-in for the part. J

Ivy Sinclair cut her romance teeth on classics like Gone With the Wind, Casablanca, An Affair to Remember, and Sabrina. She is a firm believer in true love, a happily ever after ending, and the medicinal use of chocolate to cure any ailment of the heart. Ivy’s guilty pleasures include sushi, endless Starbucks lattes, and wine. Readers of Ivy’s stories can expect smoldering sweet stories of romance that tug at the heartstrings.