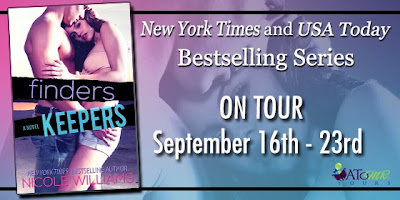 Today, I have the tour for Finders Keepers by Nicole Williams, hosted by ATOMR Tours, on the blog. I adore Nicole Williams and her books are amazing. The Lost & Found series is one of my favorites this year and I am so excited to share my review for her latest with you. Check it out and enter the giveaway.

His life has been a constant carousel of tragedy and disappointment, including his love life. Of course, applying the term “love” to Garth’s conquests is a gross misuse of the word. Some people were made to give and accept love, and others weren’t. Garth Black redefines the “others” category. He’s made a vow that the day he meets a woman who could sucker him into falling in love will be the day he runs away. 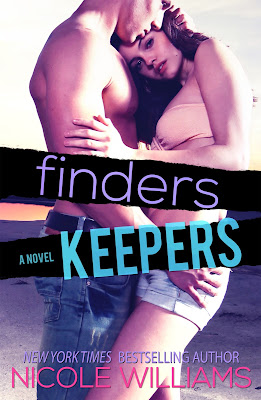 ~Prelude~
I absolutely love Jesse Walker and Lost & Found is one of my favorite books of the year. Garth isn’t exactly character of the year in that book but Near & Far shows his redeeming qualities and you really get to see a different side of him. So when I saw Nicole was writing Garth his very own story, I jumped at the chance to be on the tour. The synopsis keeps us in the dark on Garth's romantic interest but it's reveal super quick in the book. If you don't want to know who it is, this review may contain a spoiler.

What can I say about Garth Black? He is definitely the ultimate bad boy that you hate at first but end up loving by the end. And when I say “the end” I mean 3 books later. I think that is what is so great about Garth. Getting to know him is a slow process so he really develops and grows on you. He is just a side character in Lost & Found and Near & Far but his development is still there so by the time you get to Finders Keepers, he isn’t just the hated bad boy that you want to junk punch and never see again. He’s intriguing and mysterious and you want to know more about him. While I love Jesse Walker, Garth Black stole my heart.

“Women are mysterious creatures bound to make a man crazy if he spends too much time trying to decode their every move.”

Garth is the guy you definitely don’t bring home to mom and dad and he knows it. In fact, he seems to embrace being the town baddy that no one wants to give the time of day too. However, there is so much more to him and I think that he only embraces it because he doesn’t want people to see how much it hurts him that this is how he is perceived. He has been dealt a shitty hand and we already knew this from before but now we get a look firsthand look into what his life has really been like and why he puts on the tough guy exterior. He experiences a tragedy that profoundly affects him but he has had such a tough life that he refuses to show how much he really hurts. Despite his “don’t give a shit” attitude, he really is a loyal friend and he would do anything for Rowen, Jesse and Josie.

Garth and Josie have clearly always had this love/hate relationship with each other and there is always tension between the two. Josie shows such disdain for Garth but underneath it all you can tell she really cares about him and there is definitely some sexual tension between them. I really loved Josie and the way she cares about Garth. She is strong willed and very independent. This is what makes her so perfect for him because no other woman would be able to handle Garth or tell him how it is. She is one of the only people to see through Garth and the façade that he puts on for every one to see. I love their chemistry. They are so much alike in personality and the way they can banter back and forth with each other is comical.

“Garth Black. Brought to his legendary, come-back knees by a few words from Josie’s mouth.”

It’s obvious that Garth has real feelings for Josie and he always has. I loved the way he opened up to Josie and asked her to give him a chance. He wanted to be a better man for her and he was more than willing to prove himself for her. This is when I really started to fall for Garth because you see his vulnerable side and the potential he has to be so much better than he or anyone else thinks he can. Josie is the one person that sees beyond it all and has always believed in Garth’s potential. My heart broke for Garth when he started doubting his worth and believing that he isn’t good enough for Josie. He has to realize that Josie loves him for who is now and the man she knows he will become. He lets his insecurities get in the way and he makes a poor decision. Sometimes it takes a little soul searching and a swift kick in the ass from a good friend to make you realize a good thing when you’ve got it. Garth may be the bad boy but he’s a good guy inside and in the end, I felt like he really proved that. To people who doubted him. To Josie. And to himself.

“Because you deserve better than my best. You deserve the man I can and should be. Not the one everyone else knows.”

As usual, Nicole William’s writing was fantastic and I loved everything about this book. The plot flowed well and consistently. It held my attention from the beginning to the end. The characters are well developed and we really get to know Garth and Josie. I don’t know if there’s more to Garth and Josie’s story but I hope we get more stories from

I'm the New York Times and USATODAY bestselling author of the CRASH series (HarperTeen, S&S UK), LOST & FOUND series, UP IN FLAMES (S&S UK), The EDEN TRILOGY, and a handful of others. I write stories about everyday kinds of people who find themselves in extraordinary kinds of situations. I tell love stories with happy endings because I believe in making the world a better place, and that's one tiny way I can make it so. I'm one of those people who still believe in true love and soul mates, and would rather keep my head in the clouds any day over having my feet firmly on the ground.
Author Social Media Links:
Blog | Facebook | Twitter

Other books in the series:

*An e-ARC was provided to me by the author in exchange for a fair and honest review. All opinions are my own and unbiased.*

Thanks Nicole!
Posted by Unknown at 1:00 AM