~Synopsis~
Temporary. That one single word best describes my life these last few years. I’m working at a temporary job until I can finally break free. I’m my little brother’s temporary mother since our mom doesn’t give a crap about either of us. And I’m that temporary girl all the guys want to get with because I give it up so easily. According to the rumors, at least.

But now I’m the temporary girlfriend of Drew Callahan, college football legend and all around golden guy. He’s beautiful, sweet—and he’s hiding way more secrets than I am. He’s brought me into this fake life where everyone seems to hate me. And everyone seems to want something from him. The only thing he seems to want though is…

I don’t know what to believe anymore. All I know is, I think Drew needs me. And I want to be there for him. 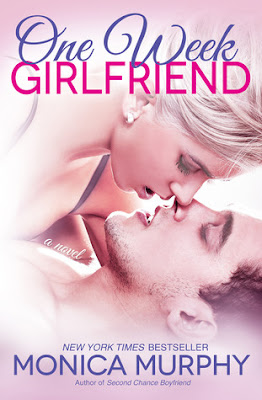 I picked up One Week Girlfriend for my kindle a while ago because I loved the synopsis. However, I hadn’t had a chance to read it so when I saw the audio version was now available through Amazon Whispersync, I jumped on it and decided I would listen to it instead. Well, you know I have no patience what so ever so I ended up listening to the first half and reading the rest. I couldn’t wait until I was in the car to finish.

One Week Girlfriend is a fantastic new adult romance novel and I absolutely loved the uniqueness of the plot and the depth of the characters. You can’t help but really feel for Drew and Fable and root for them to overcome all of the obstacles that come their way. Believe me, they both have a lot of baggage and come from two different worlds but they make each other feel something that no one else can.

Before I get into the nitty gritty of the book itself, I want to talk about the audio version first. I liked it a lot and found it easy to listen to and follow. The narrators conveyed the emotions of the characters well and I liked the voice changes the female narrator made for the different characters. However, I had a really hard time with the male narrator because I didn’t feel like his voice matched my image of Drew. First off, he sounded way too old. Drew is 21 and the narrator made him sound more like 40. I also struggled with his voice changes for the other characters, especially Drew’s dad. His voice for Drew’s dad sounded like an 80 year old man and it drove me insane. Despite the mismatch on voice selection, the audio was still really great to listen to.

There were 2 major things that knocked this book out of the park for me; the characters and the new adult theme. New adult books tend to revolve around characters with a sordid past that causes the character involved to be broken. What I loved about this book was that Drew was the one with the sordid secret past and that is a change because normally it is the girl. Fable’s life is far from perfect and she has it tough but Drew is seriously scarred. Drew and Fable are so easy to connect with and I freaking loved them both.

Fable is strong and smart and really kick ass. She isn't afraid to speak her mind and I loved her feisty attitude. She has a tough life and she has had to grow up really fast. Her mother is a dead beat and she has a 14 year old brother that she has to take care of. She works her tail off to pay the rent and buy the groceries and make sure that Owen is taken care of. She’s earned a bit of a reputation as she uses being with men as a way to forget her sorrows and try to feel again. However, it never really works. This reputation is what makes her the perfect ruse for Drew and her desperate need to take care of her family and her brother is what gets her to accept. Drew is gorgeous and popular but he is quiet and reserved. He is clearly hiding a big secret involving his family and when he is forced to go home for Thanksgiving, he desperately needs to bring someone with him as a distraction. I was immediately drawn to Drew and could tell that he had some real demons. Quite honestly, it was easy to predict what his family issues were but it was still shrouded enough in mystery that I was desperate to know the whole story.

The connection between Drew and Fable is obvious from the beginning. I mean, Drew clearly has intimacy issues that stem from his homelife but there is something about Fable that gets to him deep inside. She makes him feel things that no other woman has before. Fable just uses guys to forget for a little while because her life is so depressing but Drew is different. I absolutely loved watching Drew fight his feelings for Fable and watching her fight to break down Drew’s walls. It is clear to her how screwed up his family is the minute she meets them and it helps her understand Drew better and the reason he is so closed off. His family is very wealthy and would seem perfect from the outside but on the inside they are obviously far from it. A lot of shit goes down that week and by the end, Drew and Fable have really started to build something real. However, it’s not quite happily ever after for them yet as things come crashing down and a major revelation pushes all of Drew’s walls back up. The ending scene with Drew and Fable was beautiful but heartbreaking.

Overall, I really loved this book. I loved it so much; I had to start Second Chance Boyfriend right away because I needed to know what was going to happen with Drew and Fable. One Week Girlfriend didn’t leave on a cliffhanger but it still left much to be desired. The writing is really well done and the plot gripped me from the very beginning. I mean, I love the idea of a fake relationship turning into something more. Two people who can hardly stand each other but end up really connecting is so refreshing from the insta-love that is overtaking this genre. I absolutely adored it!