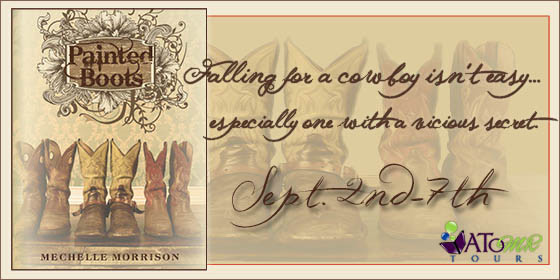 Today I have the tour for Painted Boots by Mechelle Moorison, hosted by ATOMR Tours, on the blog. I am super excited to share a review and interview with Mechelle, along with a giveaway.

~Synopsis~
When her father drags her to a new life in Wyoming, Aspen Brand doesn’t expect to fall for a cowboy named Kyle Thacker—but she does.  At seventeen, Aspen and Kyle share unexpected ground: guitar, running, physics.  And guilt.  Aspen blames herself for her mother’s car accident, while Kyle can’t find a way past his brother’s suicide.
On their first date they open up to each other, forging an unbreakable bond between them.  But Kyle has spent two years living with a vicious secret—one his ex-girlfriend will do anything to protect—and sharing his truth with Aspen makes her a target.  Now if Kyle is to be her love story, Aspen must first win the fight of her life.

Painted Boots was a heartwarming and enriching young adult contemporary novel. It covers a tough topic but I liked the way the author handled it and it really puts things into perspective and makes you think about love, loss and bullying.

Aspen is a senior in high school and her father has just moved them from Portland to Gillette, Wyoming after her mother was killed in a car accident 4 months prior. Aspen is still recovering and her emotions are on high alert. When she meets Kyle, she feels happy and alive for the first time in months. Kyle lost his brother to suicide 2 years ago and he has felt like he’s just been coasting through life. When he meets Aspen, he is finally able to breathe. However, Kyle’s ex-girlfriend doesn’t want to let him go and she has no problem doing anything to keep him and Aspen apart.

Aspen is a smart, beautiful and sweet girl. She is struggling so much after losing her mother and she is desperate to find her place in life without her. Starting a new school, especially as a senior, can be difficult and it is especially hard for Aspen because she is bullied from the beginning. This is a new experience for her but I felt like she handled it quite well. She didn’t let Em and her friends see how they got to her by making fun of her clothes and she didn’t change who she was or what she wore because of it. I also liked how supportive she was of Kyle as he finally faced the bullying he was experiencing head on. She helped him confront it head on and get the help that he needed to not only deal with the bullying but also with his brother’s suicide.

Kyle is suffering a great loss and really took a toll on him emotionally; more than he or his parents realized. Meeting Aspen wakes something up inside of him and he realizes that he can be happy and he can fall in love and he doesn’t deserve pain and misery. He expresses himself through music and he gets to share that with Aspen, which I thought was so beautiful. I really loved the way that they connected with each other. I admired Kyle for allowing Aspen to open him up and for facing his secrets and his demons head on. He would do anything for Aspen and to protect her from her bullies and he proved that time and again.

I really liked the parents in this book too. It is clear that Aspen and her dad have disconnected a little since her mother’s death because her mom was kind of the glue that held them together. However, it was obvious how much her dad loved her and he would do anything to protect her. He proved that time and time again as he fought to protect Aspen from her bullies. Kyle’s parents were really great too and they fought for Aspen as well. They were still hurting from the loss of their older son and it was hard for them to learn Kyle’s secret and know that they hadn’t seen the signs. They were very supportive in getting him help. I love reading a young adult novel with strong parental figures and this book definitely had that.

I found the plot surrounding Painted Boots to be very unique and different. It dealt with bullying which I think is a very real and prominent topic. Bullying happens so much more than we can even imagine and so many times it ends with the loss of a young, innocent life. Aspen and Kyle are both being bullied and it was very sad to watch, especially for Aspen because hers was out in the open and she felt so alone and helpless, especially when it got way out of hand. Kyle’s was more private but it wasn’t any less devastating to him. Kyle and Aspen helped each other cope and they protected one another. I think they made a few poor decisions in hiding some of the bullying from their parents and it caught up with them in the end but they learned a valuable lesson. The only issue I had with this book was the insta-love between Aspen and Kyle. I am not a fan of insta-love and I felt it was very strong and prominent in this book so that was a little hard to get past in the beginning. However, as the plot moved forward and progressed, I was able to look past it because there were so many more important things going on.

Overall, I really enjoyed this book and I liked the writing, the plot and the characters. I think the author took a difficult topic that is faced by many young adults today and she handled it really well. She shed some light on dealing with bullying and allowing the people who love you to help you deal and cope.

What was the most difficult part for you when writing PAINTED BOOTS?

-When I was twelve a group of high-school girls tried to ‘pants’ me at a summer camp.  It was an initiation thing and it was terrifying.   I used that experience, pushing it much farther than my own, when writing the attack on Aspen at school.  I was surprised at how difficult the scene was to write.  While editing I read Painted Boots over twenty times, but I had to read that particular scene even more because I kept hedging on the words.  The scene still upsets me.

What was the easiest part?  What was your favorite scene, and why?

-The Halloween Dance was the easiest to write, and is one of my favorite scenes.  While writing it I thought back to my own high school Halloween dance, which for me was an I’m-a-wall-flower flop.  Back then I was crazy-shy.  I made Aspen’s dance more like what I wish my own had been.  The words came to me so easily that I suspect, in my dreams, I’ve been re-writing that particular afternoon of my life for quite some time!  J

Did you have to do any specific research for the book?

Is there anything in PAINTED BOOTS you hope the readers take away?

Painted Boots begins on Aspen’s first day of her senior year and ends as she stands on the threshold of her future—the day she graduates.  I remember that day so well—the feeling of being free, of thinking everything is possible.  It’s been years since that day, but the feeling of it is still with me.  I believe a bright tomorrow is always there for the taking—if we’re willing to do what we have to do to make it real. 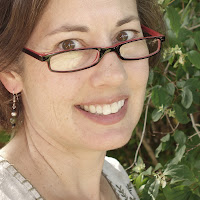 Mechelle Morrison loves language--she's always wished she could speak and write them all.  She lives for chocolate, lazy summer days, spontaneously funny things . . . and family.  She's sort of scared of dogs.

When she's not reading or writing or wandering the world, she can be found in her backyard in Utah with her husband, their daughter and the bevy of quail that live behind their garage.

If she didn't write she'd make stop-motion animation shorts.  So she does that anyway.
Visit her online:  www.mechellemorrison.com