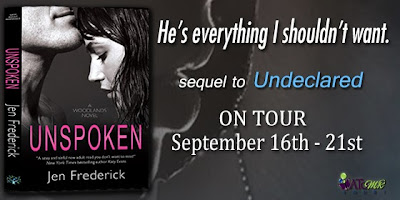 Today, I have the extreme pleasure of hosting the tour for Unspoken by Jen Frederick, hosted by ATOMR Tours, on the blog. Seriously you guys, I am in love with this series. Check out my review and enter the giveaway.

I've been called all these at . One drunken night, one act of irresponsible behavior, and my reputation was ruined. Guys labeled me as easy and girls shied away. To cope, I stayed away from Central social life and away from Central men, so why is it that my new biology lab partner is so irresistible to me?

He's everything I shouldn't want. A former Marine involved in illegal fighting with a quick trigger temper and an easy smile for all the women. His fists aren't the danger to me, though, it's his charm. He's sliding his way into my heart and I'm afraid that he's going to be the one to break me.

I allow instinct to rule my behavior. If it feels good, do it, has been my motto because if I spend too much time thinking, I'll begin to remember exactly where I came from. At , I've got fighting and I've got women and I thought I was satisfied until I met her.

She's everything I didn't realize I wanted and the more time I spend with her, the more I want her. But she's been hurt too much in the past and I don't want to be the one to break her. I know I should walk away, but I just can't. 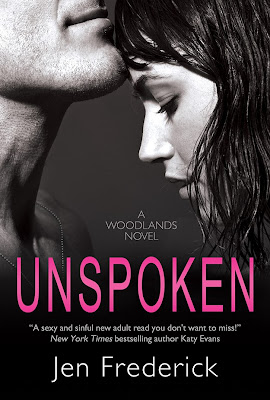 ~Prelude~
When I read the synopsis of Unspoken, I was immediately drawn to it and decided to sign up for the tour. I didn’t realize it was the second book in a companion series. When I realized this, I bought Undeclared with the intention of reading it prior to Unspoken. I didn’t get a chance but luckily they are companions and Unspoken can be read as a stand alone. After finishing this book, I am desperate to get ahead of my schedule to read Undeclared.

Lately, I have felt a little burnt out on new adult/contemporary novels which is a travesty for me because that is what I love to read. I have read so many insta-love and undeveloped books lately that I feel like it has been affecting my perspective on all books in this genre. Unspoken broke the spell. I freaking loved this book. I started it kind of late at night and I had to force myself to put down the kindle and go to bed since I had to work the next day. This was truly a fabulously refreshing read for me.

I was seriously hooked to Unspoken from the minute I started reading it. I took an instant liking to AM (AnnMarie) and Bo. Their interactions with one another begin very quickly in the book and they have this instant chemistry that was so fun to read. There was no insta-love or insta-let’s be together. In fact, Bo is mostly intrigued by her since she seems to be impervious to his charms, unlike every other girl on campus. AM is attracted to Bo, of course, but she knows his reputation and she has no plans to become involved with him. The witty banter between the 2 started right off the bat and it was one of my favorite parts about the book.

I absolutely adored AM and Bo. I mean AM is smart, witty and tough. She has been through a lot of unfair treatment and turmoil on campus because of a drunken mistake she made her freshmen year with a lacrosse player. When she denies the advances of one of the other players, he decides to make her life miserable and spreads vicious rumors about her. Because of this, she refuses to date guys from campus and she has exiled herself from all social events and on campus venues. She goes to class and then she goes home. Some may think this is weak but I actually thought she was very strong. She could have easily transferred schools and let them run her off campus but she didn’t. She may not spend much time there but this was the school she wanted to attend and she wouldn’t allow them to drive her away. She was also really strong for holding off on her attraction to Bo for so long and getting to really know him first. It would have been so easy to fall into something with him right away because he is so gorgeous and charming. The fact that she was careful with him shows her growth and maturity as a person.

“I could feel myself thawing toward him, yearning for him. I knew it was dangerous, but I needed something sweet in my life.”

Bo has a bit of a reputation as a ladies man. He isn’t a man whore though. He had a troubled childhood and he is afraid of committing so he prefers to have casual encounters over falling for someone. He is instantly attracted to AM. In fact, he has always had an attraction to her but she wasn’t digging his charms and he didn’t need to work for female affection. However, now that they are in a class together and he has a chance to get to know her, he sees something there that makes him want to know her more. I loved how protective Bo was of AM, especially after a particular incident in the cafeteria that allowed him to see her vulnerability. As a Marine, Bo has a natural protectiveness to him but he realizes his desire to protect AM goes deeper than that. Bo is definitely swoon worthy and a serious contender for book boyfriend of the year.

“You show a woman you love her by what you do for her, from opening her door to making sure that bumps in the road of life are smoothed out. That she wants and worries for nothing. That when you think about sex, it’s her face in your fantasies, her body you’re touching, her lips you’re kissing. That every day you remind her that she’s the first thought in your mind when you wake up and the last thought before you drop off to sleep.”

I have to say that this book has some of the best side characters I have read in a long time. AM’s best friend and roommate, Ellie, is awesome. I loved how supportive she was of AM and she stuck by her no matter what. She never pushed AM out of her exile and she proudly stood up for her. I also really liked Bo’s roommates; Finn, Noah, Adam & Mal. We don’t really get to know Adam and Mal much but Noah and Finn are prevalent in the book. Noah is Bo’s best friend and he is always there for Bo when he needs him. He isn’t afraid to tell Bo when he’s being a jackass but if he can’t talk sense into him, he stands right there beside him. Finn is cute, charming and he gives Bo some really great advice when he needs it. I think I see a future book of his own for Finn.

Both AM and Bo had issues stemming from their past experiences and they really had to struggle with each other to overcome them and be together. AM was reluctant to trust and for very good reason. She really made Bo work to earn it and he wanted to. He wanted her to see that he could be the guy for her and he really proved it with his actions. Bo has a lot of commitment fears that span from his childhood and the way his father treated him and his mother. He uses violence and fighting as a way to release his frustration and stress. His biggest fear is becoming like his father and he worries that he won’t be good enough for AM. I loved the way they helped each other heal and overcome their obstacles and fears.  From the very beginning, these two were so well developed and the attraction between them was magically written. Their interactions and the dialogue between them was clever and fun and the feelings they shared was steamy and passionate.

“Don’t ever laugh after you’ve had sex,” Bo mumbled into my neck. “It gives us performance anxiety.”

I really enjoyed the plot of the book and felt that it flowed well and it was gripping. There was never a slow moment and I couldn’t put this book down. I loved the writing and felt like the author really created some incredible characters. For me, a book is all about the characters and Bo and AM are one of my new favorite couples.

Jen Frederick lives with her husband, child, and one rambunctious dog.  She's been reading stories all her life but never imagined writing one of her own. Jen loves to hear from readers so drop her a line at jensfrederick@gmail.com.

For four years, Grace Sullivan wrote to a Marine she never met, and fell in love. But when his deployment ended, so did the letters. Ever since that day, Grace has been coasting, academically and emotionally. The one thing she's decided? No way is Noah Jackson - or any man - ever going to break her heart again.
Noah has always known exactly what he wants out of life. Success. Stability. Control. That's why he joined the Marines and that's why he's fighting his way - literally - through college. Now that he's got the rest of his life on track, he has one last conquest: Grace Sullivan. But since he was the one who stopped writing, he knows that winning her back will be his biggest battle yet.

*An e-ARC of this book was provided to me by the author in exchange for a fair and honest review. All opinions expressed are my own and unbiased.*