~Synopsis~
Laney Walker is a quick witted, athletic, southern tomboy who lets few get too close, using her sarcastic zingers to deflect. She also has no idea how others view her, Evan having protected and coveted her since they were children. But college puts a gap between Laney and Evan that neither of them were prepared for- old relationships are tested, new ones are formed and nothing will ever be the same.

Especially when in walks one Dane Kendrick, not at all the familiar, southern charmer of home, but an animal all his own. 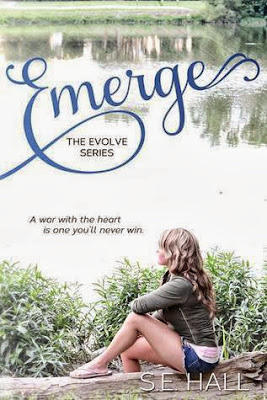 When I started reading Emerge, I was immediately drawn into this beautiful story. Just like the synopsis says, it is about friendship, love and life. You change and grow so much in your first year of college and this was reflected so well in this book.

Laney and Evan have been best friends since they were children but as they grew into young adults, their love as friends grew into something more. I loved the evolution of this friendship and Evan and Laney felt so right for each other. He is gorgeous, sweet and protective but he also knows how strong Laney is too. When Evan gets into UGA and Laney doesn’t, she is devastated and decides to go to Southern, which is 5 hours from where Evan will be. This was hard for her because she had dreams of being at UGA with Evan, even before they became a couple, and now her plans have changed. Laney decides that she and Evan should go off to college as friends instead of a couple because she doesn’t want him to feel pressure or guilt because of the long distance. I really liked this because they are so young and I think they both needed the time and space to find themselves without any pressure.

Laney definitely struggles at first because she misses home, misses Evan and she is still disappointed about not getting into UGA. However, she is lucky to meet some really great friends, including Dane. I liked Dane, a lot and that was when I knew I was going to be torn apart in this book. I loved Evan from the beginning and his love and devotion to Laney is amazing. So when I met Dane, I wanted to hate him and I was waiting for him to give me a bunch of reason to. Unfortunately, that didn’t happen and I was caught up in this love triangle with Laney. She is immediately drawn to Dane and this confuses her because she has always loved Evan and there has never been anyone but him. I really felt the chemistry between them and I became as confused as she was. I loved how much she cared for each guy and didn’t string them along or manipulate them. She was always upfront with Dane about Evan and when she realized her feelings for Dane, she refused to take their relationship further until she talked to Evan. I admired this because she and Evan weren’t a couple and she had no obligation to him. This just shows Laney’s true character and what a fantastic person she is.

I really enjoyed watching Laney grow and find herself. She definitely learned how to make the most of a bad situation and despite the truths she learns about some of the people in her life, she stays strong and she realizes that she is actually happy right where she is. While most of the book is Laney’s POV, I really liked the way the author injected Evan and Dane’s POV every once and a while. She knew exactly when we needed to know what they were thinking and gave us that glimpse into their thoughts. I also really liked “The Krew” of Laney’s new friends; Bennett, Tate, Sawyer and Zach. They were great friends and they were there to help Laney, support her and give her much needed advice. I have to be honest and say that I was completely torn between Evan and Dane through the entire book and even after she made her choice, I’m still not sure how I feel. I think she made the right choice for her based on her true feelings but my heart broke for the other guy and I’m still trying to recover.

“The age old love triangle only seems cliché and trite until you actually find yourself in one, then it becomes agony.”

Overall, Emerge really impressed me and I loved the story and felt like it sent a really powerful message too. There were some interesting twists and surprises that I didn’t expect and I liked how well they merged with the plot. The book was very well written and the plot flowed really nicely. I am so excited to have the opportunity to read an ARC of book 2 because I am dying to see where the story goes.

*The author included some awesome music in this book so check out her playlist at the end.*

*An eBook copy was provided to me in exchange for a fair and honest review. All opinions expressed are my own and unbiased.*
Posted by Unknown at 9:52 AM