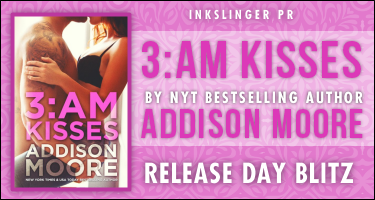 Yay!! Today is the release day for 3:AM Kisses by Addison Moore, hosted by Inkslinger PR. I absolutely adore Addison and 3:AM Kisses is a fabulous new adult novel. To read my review, stop back by on Friday, September 20 to check it out as part of the blog tour.

~Synopsis~
Baya Brighton is looking forward to her first year at Whitney Briggs University, new friends, dorm life, and finally being close to her brother again. Love is the last thing on the list, but when Baya meets her brother’s roommate she begins to have thoughts and feelings that make even her blush. Bryson Edwards has a secret he prefers buried in the past and long forgotten. He prefers loose girls, fast cars, and long nights working at the string of bars his family owns. When his roommate’s sister shows up on the scene, she’s far too innocent and sweet for him but he can’t shake Baya out of his mind and worse, it looks like she’s seeping into his heart as well. Baya seems determined to show her brother she’s not a little kid and equally determined to use Bryson’s body to prove her point. It’s been made pretty clear that Baya is off limits to Bryson but their undeniable sparks explode into a whole lot more than just a few 3:AM KISSES. 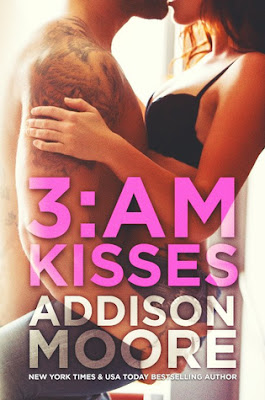 
Addison Moore is a New York Times, USA Today, and Wall Street Journal bestselling author who writes contemporary and paranormal romance. Previously she worked as a therapist on a locked psychiatric unit for nearly a decade. She resides on the West Coast with her husband, four wonderful children and two dogs where she eats too much chocolate and stays up way too late. When she's not writing, she's reading.