I am super excited to have the tour for Taming Cross by Ella James, hosted by Inkslinger PR, on the blog today. Ella is amazing and I have review and giveaway to share with you today.

~Synopsis~
For twenty-three years, Cross Carlson was a playboy. You know the type. Tall, dark, and wealthy. Blue-eyed. Charming. He seemed to have it all so easy. But Cross was harboring a terrible secret - one that helped ruin the life of an innocent girl and almost ended his own.

Finally out of the hospital, Cross is flailing, scarred in both body and mind and stifled by the weight of the secret he still keeps. The only way to absolution lies in a Mexican convent, and going there could cost him everything.

If there's anyone who knows what it's like to screw up big time, it's Meredith Kinsey. Just a few years ago, Merri was an ordinary girl with a job at her college newspaper and white picket fence kind of dreams. Now she's holed up in a Mexican convent, hiding from a drug lord who thinks he owns her.

What happens when the only way out of hell is with the son of the man who put you there? They say love conquers all, but does it really? 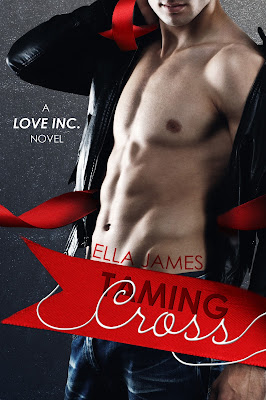 Taming Cross is a suspenseful, dark romance that was exceptionally unique and a very enjoyable read. I loved the characters and I especially loved the plot. After reading several new adult novels that all seemed to share the same plot characteristics, this book was a welcome relief.

I love Cross! He has suffered a lot over the last year and it has put a lot into perspective for him. He realizes that he has taken so much for granted and he made so many mistakes. He feels guilty for Meredith’s predicament and he wants to rectify the situation. He doesn’t know what to expect but he is definitely surprised by what he finds and he can’t help his attraction to her. He definitely realizes that there is so much more to Merri than he thought and as he learns her story, he finds himself falling for her. Cross is a man who knows what he wants and when he realizes that is Merri, he does everything he can to make her see that.

Merri has been through and unthinkable ordeal and she has all but given up on life when Cross comes to her rescue. She had made decisions in her life that she realizes were wrong but she has lived a lonely life and all she has wanted was to be loved and cherished by someone. Unfortunately someone like that generally attracts all the wrong attention. Cross is her savior and he puts himself in danger multiple times to save her and she finds herself falling for him. When she finds out who he really is, she has no hope that they can be together and she runs. I felt so bad for Merri because she truly believed that she had no one and she wouldn’t allow herself to see that Cross wanted to be with her.

The plot was action packed and I was on edge as Merri and Cross ran for their lives. Even though Cross was rescuing Merri from the drug cartel, I felt like she rescued him too. Cross was at a place in his life where he felt hopeless and depressed. Merri gave him light and a reason to be happy again. It was unexpected for both of them. Even though they were exactly what each other needed, Merri really struggled to see that and I wanted to shake her each time she tried to run from Cross. She just couldn’t believe that he would want her or could love her and I was glad that Cross was determined to prove her wrong. He fought for her until the end and I was so glad that he opened her up and made her realize that he wasn’t going anywhere and that she deserved him.

Overall, I was very impressed with Taming Cross. While this was about Cross and Merri falling in love and saving each other with their love, it also had an excited and thrilling plot. Just when you think they are in the clear and they’ve escaped danger, they are rocked by another violent encounter and their lives continuously hang in the balance. Poor Cross, that man spent more time in a hospital bed than he did in a regular one. Ella is a fantastic author and I knew this after reading the Stained series but I was thoroughly impressed with her ability to write a completely different type of story and that had a well-developed plot and excellent characters.

About Ella James:
Ella James is the author of Stained and Stolen, books one and two in the Stained Series; HERE, book one in a sci-fi romance trilogy; and Before You Go, a romance YA beach read that tells the first meeting of Logan and Margo, who will be featured in her upcoming adult release, Over The Moon. She has a YA paranormal romance release scheduled for every month of 2012, including Chosen (Stained Book Three) in June and the second HERE book in July. Ella is inviting readers to help her write a shapeshifter romance, which is plotted via polls and questions on her blog and her Facebook page. Ella lives in Birmingham, Alabama, with her wonderful husband, opinionated baby, and mopey dog. You can visit her blog at www.ellajamesbooks.blogspot.com, or friend her on Facebook atwww.facebook.com/ellajamesbooks. For a list of her award-winning YA romances, visit her Amazon page at http://www.amazon.com/s/ref=sr_tc_2_0...