~Synopsis~
Two women caught in a struggle between Death and the Dark One …Gabriel – Death – is winning the ground war against demons in the mortal realm. But a rebellion is brewing among his army of grim reapers in the underworld he still can’t access. Worse, just when he thinks he knows where his heart belongs, he discovers there are two Deidres: the human he started to fall in love with and the deity whose love-hate relationship with him spanned hundreds of thousands of years. What he doesn’t know: the two Deidres made a deal that will send one of their souls to the underworld by the end of the week.Deity-Deidre expects nothing but smooth sailing in her future. Until the Dark One strips her powers on her way out of Hell, leaving her a vulnerable human, reeling under the influence of human emotions, which deities do not possess. The deal she made with human-Deidre suddenly seems impossible to win. For the first time in her existence, she understands what Gabriel felt at her mercy for the eons they were together. She doesn’t know how to win the trust of the man she’s always loved – or even if she can. 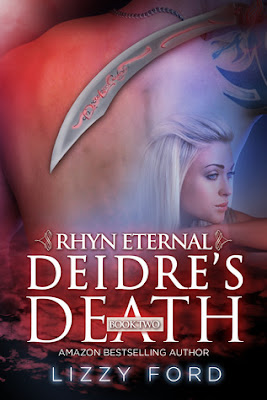 ~Prelude~
I absolutely adore Lizzy Ford and her writing style. I have read all of her books and she is a writing machine I just can’t keep up with. The Rhyn Trilogy was so awesome and I couldn’t have been happier to find out she was going to make a spin-off series in the form of The Rhyn Eternal series. Gabriel’s Hope was one of my favorite out of all the Rhyn books so Deidre’s Death was worth the wait!

With the way Gabriel's Hope ended, I had to know what was going to happen with Past-Death Deidre and Human Deidre. I love human Deidre and the relationship that she built with Gabriel in the first book so I was super nervous for what would happen between them in this book.

In Gabriel’s hope, Human Deidre becomes Gabriel’s mate but he is reluctant to trust her because of his dealings and the relationship he had with Past Death Deidre. When he finally starts to open up, Deidre makes a decision that changes everything. The effects of that decision are the prevalent point of the plot in Deidre’s Death.

Past Death Deidre is back and she is ready to win Gabriel’s heart. She has made a death with Human Deidre and Darkyn that can have major consequences if she doesn’t win the deal. Immediately Gabriel can tell that she is different but she doesn’t have the courage to tell Gabriel what she did to Human Deidre or the deal they made. When he finds out what she did, he is angry, and has conflicting emotions about the situation.

"Only the Dark One can raise someone from the dead"

I love Gabriel! He is so compassionate and a really decent guy. He can’t help but love Past Death Deidre, even though she has put him through a lot over the centuries. He has so many conflicting emotions when it comes to her. He can see that she is different now but it is going to take time for him to be able to trust her and love her again. Gabriel is dealing with a lot of issues surrounding his work and the last thing he needs is drama with Deidre. Unfortunately, that is exactly what he gets.

I love Human Deidre and am not really a fan of Past Death Deidre. She is so cold and manipulative whereas the other Deidre is kind and selfless. In the beginning, I was a little disappointed with the deal that was made between the two and what happened with Human Deidre because I loved her and Gabriel together. However, as the book went on, I could see that everything that had happened had changed Past Death Deidre and that a lot of the things she did were because she loved Gabriel. I definitely felt differently about her by the end of the book. Also, considering what happened to Human Deidre, I am very curious to see how everything is going to play out.

"She'd never let him touch her like that before, but she found his touch calming."

Overall, I really enjoyed this book and as always, the writing is wonderful and the plot is always intriguing. I never quite know where Lizzy is going to take things and I like that. She always leaves me wanting more in the end but doesn’t hang me over a cliff either. It is a beautiful in between. I can’t wait to start reading Darkyn’s Mate and see what is going to happen.

*An eBook copy of this book was provided to me for an honest review. All thoughts expressed are my own, unbiased opinion.*
Posted by Unknown at 4:49 PM

Email ThisBlogThis!Share to TwitterShare to FacebookShare to Pinterest
Labels: Paranormal