Review: Losing It by Cora Carmack

Bliss Edwards is about to graduate from college and still has hers. Sick of being the only virgin among her friends, she decides the best way to deal with the problem is to lose it as quickly and simply as possible-- a one-night stand. But her plan turns out to be anything but simple when she freaks out and leaves a gorgeous guy alone and naked in her bed with an excuse that no one with half-a-brain would ever believe. And as if that weren't embarrassing enough, when she arrives for her first class of her last college semester, she recognizes her new theatre professor. She'd left him naked in her bed about 8 hours earlier. 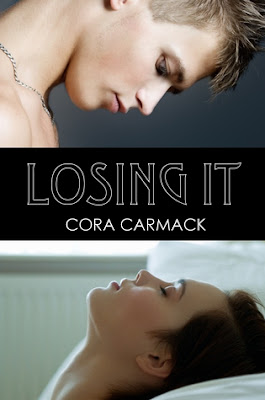 ~Prelude~
I heard about Losing It when Faking It was released and I picked up both books while they were on sale. It has been a while and when I had some downtime on a trip, I decided to read it. I can’t believe I waited this long. I had heard from a few blogging friends how good it was but I had no idea until I read it.

I was hooked to Losing It from the very first chapter. I loved the characters and the writing and the theme of the plot as well. I always find books where the student/teacher meet and have a connection before they know there in such a predicament. It definitely makes for good entertainment.

“Heaven help me, but I wanted my teacher to be my boyfriend.”

Bliss is probably one of my favorite female MC’s of the year. She is fun, sexy and smart but she is also totally awkward, especially with men she likes, and she cracked me up with her internal dialogue. She doesn’t want to be a virgin anymore but when it comes down to it, having sex with a complete stranger just isn’t her. She tries it and ends up leaving a sexy man in her bed with a preposterous excuse for why she has to go. When she realizes that Garrick is her new professor, she is beyond humiliated but I think she does a really good job of not letting it affect her in a negative way. In fact, she does the opposite and uses those feelings to make her a better actress. I always loved her honesty with Cade and the fact that she never led him on and told him how she felt right up front. His friendship was so important to her and she made that number 1.

“Somewhere between Saved by the Bell and Gossip Girl, it became unheard of for a girl to graduate college with her V-Card still in hand.”

Garrick, oh dear, Garrick. I really liked him and the way he was with Bliss. He understood the implications of them being together but he truly had feelings for her and never intended her to be some one night stand he would just forget about. He tried to stay away from her because of their situation and that was what she wanted (or so she claimed) but it was impossible. I loved how sweet and caring he was and the way he took care of her when she was sick. Sexy and British, I think he is every woman’s fantasy.

“Those were exactly the right words. Carried away. I had never been so caught up in another person before. I’d never been so… out of control. It at once excited and terrified me.”

This book also had good side characters with Cade and Kelsey, her best friends. I liked Cade though I thought he acted like a dick to Bliss when she told him she didn’t share his feelings. She was open and honest with him and he kind of acted like a baby about the whole situation. When he came around though, he went back to being a good friend. While I’m not a fan of the way he acted, I understand he was broken hearted and hurting so I could easily forgive him. Kelsey was an excellent friend and always there for Bliss. While she was a little pushy at times, she just wanted to help Bliss find happiness and she was a loyal friend. Of course, the other members of their acting group, Dom aside, were fun and entertaining.

Losing it was fun, entertaining and steaming hot. The sexual attraction and tension between Bliss and Garrick was electric and I was constantly anticipating the moment they would both stop fighting it and just let it happen. Despite all of the obstacles in their way, the instant connection they held and their attraction to one another was too much to fight and they both needed to explore this and see where it would go. In the end, I was happy with the decisions they made and the path they went down together. The epilogue was so sweet and I loved how well Garrick knew Bliss.

“Sometimes it’s the scary things in life that are the most worthwhile.”

Overall, I was so impressed with Losing it and I loved everything about it. Fantastic characters, charming plot and incredible writing made this a must read book. I can only say that I was disappointed I didn’t read it sooner.


"Closer to Love" by Matt Kearney
Posted by Unknown at 1:13 PM