Review: The Impact of You by Kendall Ryan #GwB

The Impact of You
Author: Kendall Ryan
Publication Date: June 7, 2013

Needing an escape from her past, Avery chooses a college where no one knows her. Keeping a low profile was the plan, falling for the intense frat boy, Jase wasn’t. Yet she can’t deny how alive she feels when he’s near. Even as common sense implores her to stay away, her body begs her to get closer.

Jase, numb from his own family drama, has grown bored with weekends fueled by nameless girls and countless bottles when he meets Avery. Helping her cope with her past is better than dealing with the bullshit his own life’s served up. Determined to drive away the painful secret she’s guarding, he appoints himself her life coach, and challenges her to new experiences. Getting close to her and being the one to make her smile are simply perks of the job.

But when Avery’s past boldly saunters in, refusing to be forgotten, can Jase live with the truth about the girl he’s fallen for?

Recommended for 17+ due to mature themes and sexual content 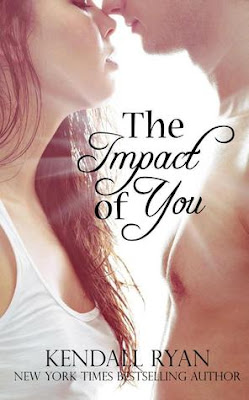 ~Prelude~
was this week's #GwB read for the Twitter read-along with Trish @ Between the Lines, Jessica @ Lovin LosLibros, CeCe @ Steaming Mug of Books, Wendy @ Book Scents, Danielle @ What Danielle Did Next and Tonya @lilybloombooks. I was really looking forward to this one and loved the idea of this book. However, it wasn't what I expected and I was left disappointed.

I hate having to give a less than stellar review and I hardly ever give below 3 stars. However, I was sadly disappointed in The Impact of You. There were a lot of issues that I had with this book but the main thing that drove it down for me was the characters. Neither Avery nor Jase were very likable and I could not connect with them.

Avery had gone through some sort of scandal in high school that left her guarded and broken. She shied away from men, parties and living life in general. Jase was a man-whore who used women and partied all the time until something happened with his mom that sobered him up a bit. He meets Avery and immediately wants her because she doesn’t want him like every other girl. He becomes her “life coach” and gives her all of these challenges to complete to help her open up and live a little more. They start to fall for each other but Avery’s secret is revealed and it threatens to tear them apart for good.

Avery wasn’t a terrible character but I couldn’t really connect with her or find many likable qualities about her. She is supposed to be guarded and un-trusting but she lets her guard down with Jase pretty damn quickly and I find that a little dis-believing. She was also very wish-washy to me and got unreasonably jealous and catty while she kept claiming that she and Jase were “just friends”.  She was just a blah character for me and I can’t really think of much else to say about her.

“What the hell was that and why do I feel the need to punch something? We’re just friends, I remind myself. He can talk to whomever he wants.”

Jase is a complete douchebag and a total tool. I did not like him AT ALL. He is supposed to be this reformed guy who breaks Avery from her shell and teaches her to trust men again. However, he is judgmental and hypocritical. He also comes up with all of these stupid challenges to do things he doesn’t really want her to do because he likes her. It made absolutely no freaking sense. When he finds out her secret, he goes all “holier than thou” on her when he was clearly not the best person himself. He shuts her out without letting her explain but blabs her secret to her friends because he is “worried” about her. Then he preaches honesty and turns around and lies to her. No amount of “I’ve changed” speeches and groveling is going to make him less of a douche.

“This girl is different, and I’m completely thrown of my game. But I kind of like it. She refuses to drool over me, and I respect her for that.”

I enjoyed the book well enough in the beginning and I was very intrigued to find out what Avery’s secret was and what direction the relationship with Jase would take. Her secret was not really what I expected and definitely under-developed considering it seemed to be a huge part of the book in the beginning. There was a lot going on in this book and it felt like every little storyline was only half developed and a little discombobulated. Because of that and the many frustrations with Jase, the book fizzled out half way through. I wanted to like it, in fact, I wanted to love it. Unfortunately, we don’t always get what we want and this book just wasn’t for me.

In spite of my many dislikes, I think Kendall Ryan is a great writer and I liked the concept of this book. My dislike of this book is in no way a reflection of her or her writing but rather my personal preferences. I just couldn’t get past the many character flaws of Jase. If I can’t get into the characters, I can’t get into the book so this one just died out for me. I’m still interested in checking out another Kendall Ryan book because sometimes it’s not the author, it’s me and I just couldn’t get on board with this book.