I am excited today to have the blog tour for Barbie World by Heidi Acosta, hosted by Xpresso Book Tours, on the blog today. I have a review and giveaway to share with you all!

~Synopsis~
“One Night is all it took to change everything between Barbie and me. One night to potentially lose the girl of my dreams forever. How do I prove to her that she can trust me? That all I want to do is protect her carefully guarded heart. I need to prove to her that I want to be a part of her world. But How? ”
Dylan lost Barbie once before, now he is determined more than ever to win her heart and trust back. Easier said than done, especially with the new hot guy in town who is in a rock band and is the complete opposite of Dylan.
Barbie has been hurt beyond repair or so she thinks. It would be easier for heart to decide if she didn’t have to protect her little brother. And if Dylan would just put on a shirt! Dylan is not making this easy on her. It helps to have the distraction of the new guy in town cute bad boy Kai. But even though her heart is damaged it still knows what it wants.


When Barbie learns she has a family and with the help of Roxie and Kai, oh and Third and Dylan. They embark on a journey to help bring Barbie closer to a past she never knew existed. 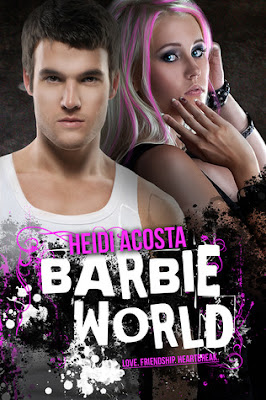 ~Prelude~
When I saw this book was looking for blogger to join the tour and read the synopsis. I was intrigued enough to sign up. When I realized it was the second book in a series, I figured I should probably read the first book, Barbie Girl, first. I’m not crazy about the covers so I wasn’t sure about the books but after reading Barbie Girl, I was definitely surprised and glad I didn’t pass these up because of the cover.

Barbie World picks up a few weeks after Barbie Girl ends. Barbie Girl was very heart-wrenching and tragic but Barbie World is all about healing and moving forward. Barbie and Dylan went through so much together and now they are apart. They both love each other but there are so many obstacles in their way. Is love enough?

Considering everything that happened in Barbie Girl, I felt like Barbie was handling her situation very maturely. Everett is her top priority and she will do anything to protect him, even push Dylan away if she feels she has to. She still has so much disappointment in herself and she doesn’t think she is good enough for Dylan. It makes me so sad because if she would let him in, Dylan could be so good for her. She meets Kai, who is the opposite of Dylan. He is in a band, has tattoos and is the type of guy she thinks is more her style. However, no matter how hard she tries, she can’t forget about Dylan that easily. She keeps letting Dylan in and then pushing him away and I wanted to scream at her and tell her to just let him love her.

“I hate that I feel that I need to push him away when all I want him to do is come near me and pull me to him.”

Dylan loves Barbie but he stays with Katie to protect Barbie. I have to admit that I didn’t like that at all because it didn’t make any sense. Being with Katie only pushed Barbie further away and made Dylan seem like a douche. He is staying with his girlfriend while he is professing his love for Barbie and asking her to give them a chance. Breaking up with Katie in the beginning would have been the best way to prove his love to her. He gets angry and jealous when he sees Barbie with Kai but he is letting Katie paw all over him in front of Barbie. It was a bit hypocritical and I was proud of Barbie for holding her ground and forcing Dylan to prove he loves her.

“I don’t know what is going to happen, but I know I am getting my girl back and whatever the consequences, we will face them. We will face them together.”

Third and Roxie are awesome as usual and they are 2 friends that Barbie desperately needs and they are always there for her. No matter what happens, she knows she can count on them to be there for her. It was cute to see Third and Roxie’s relationship grow too. Roxie is jaded and she has a hard time letting Third in but he is persistent and doesn’t give up on her. He cracks her armor and I loved it.

Barbie finds out she has family she never knew of and she goes in search to find some answers. Her childhood is a direct result of her mother’s childhood and she feels like she can fix things with some answers. While she doesn’t get the answers she wants from her grandmother, she finds love and support from other family members that she least expected. I was heartbroken for her when she met her grandmother and things didn’t go the way she hoped. Kai, Dylan, Third and Roxie were there for her and helped her get through everything. While Kai and Dylan fought for her affection and wanted her to choose, ultimately she chose herself and she made the best decisions for her and Everett. There were things she had to do and if her and Dylan were meant to be, she knew she would find her way back to him. I was so happy for Barbie and the unexpected family that she found in the end. She finally discovered that she can be loved and that her mother’s treatment towards her was never about her, but her own demons she was fighting. This allowed Barbie to move on and finally reach her potential.

“Barbie has taught me that life is full of hurt, but it is also full of wonderful and beautiful things. If you just let go long enough, they will find you.”

Overall, Barbie World was an excellent second book and the grammar and formatting issues dramatically improved in his novel. Barbie Girl was a much more emotionally intense read but there were still moments in Barbie World that tugged at my heart. The epilogue was fabulous and I couldn’t have asked for a better ending. I was a little nervous at the end but the epilogue took those fears away and left me very satisfied.

Heidi Acosta was born on Long Island, New York. Moving around a lot when she was younger, she has lived in New York, Arizona, New York (again), Washington, Georgia, and Florida, in that order. Each place offered her something special, but she will always consider New York her home.

Heidi started writing as soon as she could spell. When she was three, Heidi’s mother gave her a copy of Laura Ingalls Wilder’s Little House in the Big Woods; thus beginning her lifelong love affair with literature.


Writing soon also became a form of therapy for Heidi, when she realized that no matter what was happening in her life, she could find emotional escape while writing. Some of her earliest stories featured her as a princess who explored new worlds with her horse Buttercup. If it sounds romantic, it wasn’t, there was no prince charming in those fairy lands (boys where yucky).

*An E-Arc of this book was provided to me in exchange for a fair and honest review. All opinions expressed above are my own and unbiased.*