I was on vacation this past week so things were a little slow on the blogosphere for me but I'm back and ready to catch up!!

This week's read-along was Romancing the R.A. by Ashelyn Drake
Trish @ Between the Lines
Jessica @ Lovin Los Libros
CeCe @ CeCe's Steaming Mug of Books
Shari @ Tangled up in Books
Danielle @ What Danielle Did Next
Wendy @ Book Scents
Tonya @ lilybloombooks
Check out all of their awesome reviews for this book!

Books I received for Review/Blog Tours
Big thanks to all of the authors for providing these books for review! Also thanks to Xpresso Book Tours for All My Life, Addicted to You and Barbie World and thanks to Kelly @ Inkslinger PR for Undertow.

Books I Bought this Week
I was on vacation this week so I didn't pick up many books which is a good thing for me. I seriously don't need them. 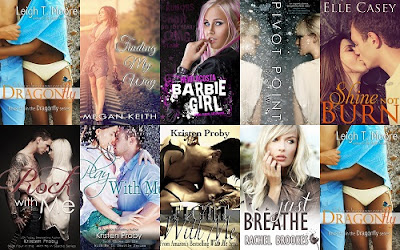