Blog Tour: The Parts I Remember by A.K. Mills ~ Review

I have the Blog Tour for The Parts I Remember by A.K. Mills on the blog today. This is a New Adult Contemporary novel and I am excited to share a review with you.
To check out the other stops, click on the banner above.

Welcome to Kelly Rockport’s existence at Haysville University, where responsibility is just an elective. After all, fake IDs, alter egos, and one-night stands are all part of the college experience, right? So what if she blacks out from time to time? Memory is overrated.

When freshman year lasts about as long as a one-night stand and is quickly followed by the Year of the Blackout, Kelly projects junior year to be nothing shy of amazing. But as shots, beer, cocaine and men mesh together in an intoxicating haze, Kelly’s reckless ways get her into serious trouble. The only problem is, she can't remember what happened.

As she hovers along the edge of consciousness, Kelly forces herself to think past her pain to piece together the shards of her life. This is her story, told in her words: The Parts I Remember. 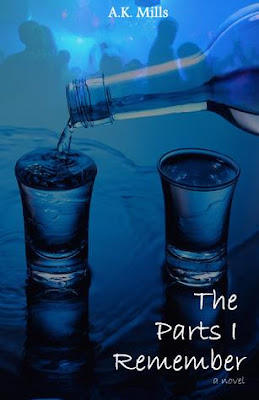 ~Prelude~
When I was asked to be a part of this blog tour, I wasn’t sure if this is a book that I would enjoy based on my reading preferences. I looked it up on Goodreads and saw that it had some good reviews so I decided to give it a shot. I am glad that I did and found it to be right up my alley.

The Parts I Remember was a mix between Contemporary and New Adult and I liked that because it made it unique. I read a lot of new adult books and this book was very different from anything I have read.

The Parts I Remember chronicles Kelly Rockport’s life in college as she starts out as an average college freshmen. Kelly makes friends with her quadmate, Meredith and they become best friends. They are so much alike and they are inseparable. Kelly and Meredith quickly get into partying drinking and sex. As they move through their freshmen, sophomore and junior years, there partying and random sexual partners becomes worse. In the end of their junior year, they go through a life changing experience and they must all deal with the aftermath of their choices.

“One stupid decision,” he said in his most serious tones, “and your life, the lives of those who love you, is changed forever.”

Kelly wasn't really a likable character but mostly because of the choices she made versus who she really was. She was witty, smart and had the potential to be so much more. However, she made terrible choices and didn't seem to care too much about what she was doing to herself. I really wanted her to learn from her mistakes but she never seemed to do that. Kelly was the type of character that didn't grow, but instead, devolved. She was extremely selfish and took advantage of her sister and everyone else who cared about her. She never recognized the affect her actions had on other people and she always made excuses. It took something major for Kelly to truly understand what she had become and that was so unfortunate.

“I thought I could improve my memory with practice so the alcohol would have less of an effect on my recollections, but I was never able to run a controlled experiment because as my tolerance increased, I drank more. And as I drank more, I remembered less.”

Usually when a character is unlikable, it takes something away from the book. However, this was the opposite case in this book because it was the whole point of the story. Kelly’s selfish, destructive behavior is what drove the plot and made this book what it was. It really opens your eyes and conveys a powerful message about how our actions affect not only our lives, but the lives of those around us. Kelly chose to party and drink and try drugs and have random sex. When she called her sister to continuously bail her out, she didn’t think about what she was putting her sister through. When she was called out on her actions, she simply apologized and felt that was good enough. In the end, they all enabled her by allowing it to be okay when it wasn’t.

“Unfortunately, I’ve come to learn that in life, there is no Delete button.”

I really enjoyed this book a lot. It was really well written, the plot was intriguing and flowed together nicely. I really enjoyed the flashback style that it was written in and I was eager to keep reading. I loved the powerful message that this book sent and as much as Kelly made me crazy and I wanted to scream at her, I felt bad for her and the downward spiral that her life took. Sadly, this is a reality for many young adults who lose themselves in self-destructive behavior. The ending was very emotional and did an excellent job of carrying through the message this book was meant to convey.

Reading has always been a passion of mine. I remember as a child getting lost in Nancy Drew mysteries late at night with a flashlight long after bedtime, unable to sleep until the story was done. Summer vacations didn't properly start without first visiting the bookstore and selecting a fresh story. Unfortunately, I could never read in the car because of motion sickness. Writing was something I did mostly in private.

I still can't read in the car, but my love of books hasn't diminished. When I opened a time capsule that was buried in 1999, my hope for the year 2010 was to have published my first novel. Three years later, that dream came to fruition as The Parts I Remember was published on March 1, 2013.

*An eBook copy was provided to me by the author for an honest review. All opinions expressed in this review are my own and unbiased.*
Posted by Unknown at 12:30 AM