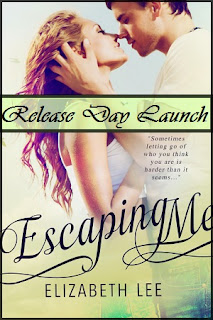 I am super excited to participate in the release day launch for Escaping me by Elizabeth Lee, organized by Inkslinger PR. I really enjoyed this book and am excited to share a photo teaser, my review and a giveaway today.

~Synopsis~
All she wanted to do was forget. Forget the memory of walking in on her boyfriend in the middle of, well, another girl. Forget how she had her entire life planned out. And, forget about being perfect all the time. Unfortunately, she was Whitney Vandaveer and despite the fact that she moved to the middle of nowhere – she couldn't.

He always knew he would never be more than nothing. No job, no money, no future. Cole Pritchett had accepted the fact that he would always be the screw up and he was okay with it. Until he met her.

Here's the thing they quickly found out – sometimes we all need a little help escaping who we think we are. 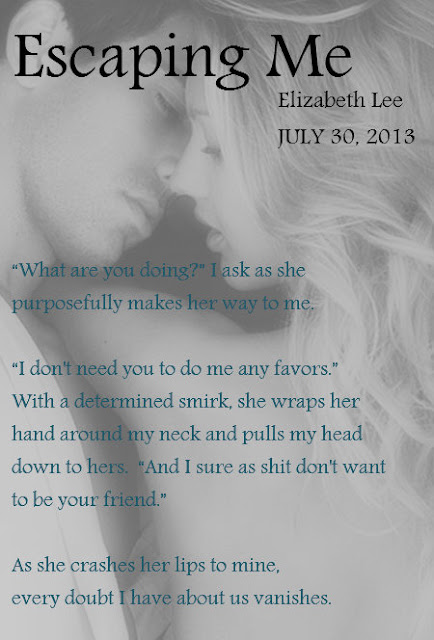 Escaping me was a really exciting read. I felt like I was on a rollercoaster ride the entire time. Anything and everything that could go wrong did go wrong and it lasted to the bitter end. There were also a lot of high and happy times in this book as well. Hence the rollercoaster ride.

I liked Whitney. She had the potential to be a stuck up rich bitch but she wasn’t. She was really down to earth and just struggled to stand up for herself and be who she really was. She held herself to the standards that her father put on her and made her decisions based on these standards. When her dickhead boyfriend cheats on her, she goes to stay with her mom in the country and she is finally free to really find who she is. Spending time with her carefree mother and sister, along with meeting Cole, help her discover the real Whitney. I liked the way she opened up with Cole and became a more confident, self-assured woman. She didn’t hold anything back and she started to see herself as more than some rich guy’s future trophy wife. She thought of her own dreams and goals and she had Cole right there encouraging her the entire time.

“The gray t-shirt that is stretched across his back reads Wilson Lumber Yard with their catchy slogan underneath—“We Got Wood”. I fight back a giggle. At least someone has a sense of humor.”

Cole was a good guy and I really liked him. However, he had some real self-esteem issues in the beginning and his negativity towards himself got a little annoying. However, after meeting Whitney and having her treat him like he was worth something, he became more confident and less of a downer. He really grew as a character and the more time he spent with Whitney, the more he came out of his shell and started to see that he could be more than the fuck up he was always told he was.

“I know we don’t know each other well enough to be in love yet, but I can absolutely see mayself falling for this girl.”

Escaping Me has some really great side characters too. Zeke is funny and a really great new friend for Cole. He has his back and he gives some great advice to Cole when it comes to Whitney. I also really liked Mallory, Whitney’s sisters. She was a little fire-cracker and she stood behind Whitney no matter what. She had some drama of her own but she handled it like a pro and I loved the sisterly bond between her and Whit.

“Mallory’s batshit crazy and Zeke’s got a lead foot.”

When Cole & Whitney first meet, they have this attraction but recognize that they are very different and try to deny it. Actually, Cole tries to deny it and Whitney will do whatever she has to in order to spend more time with him. I loved the way she straight up took charge with Cole. This was completely out of character for her and it was fabulous. It certainly worked on Cole. I really enjoyed the way Cole was with Whitney and how gentlemanly he was. He wanted everything to be perfect with her and he strived to do this. You could see the way they brought out the better in each other as Cole became more confident and Whitney came out of her shell. Of course, everytime things were going great for them, something got in the way to push them back a little; Pretentious ex-boyfriends, psycho ex-girlfriends, over-bearing fathers. I have to admit that his book made me exasperated, but I liked it.

Overall, Escaping Me was a wonderful read and I found myself hooked to it from the beginning. I spent an entire Saturday morning reading this book and I didn’t want to put it down until the end. The author did an amazing job at keeping me on my toes and constantly guessing what will happen next and whether or not Cole and Whitney will have their happy ending.

When I'm not writing or playing the part of wife and mother, you can find me dancing back-up for Beyonce, singing back-up for Miranda, or sunning myself on the beach with a drink in hand.  Here's the thing about being born and raised in a small town—you have a very vivid imagination!  Now, I channel it all to create stories where the girl always ends up with the right guy, first kisses are magical, and a happy ending is just that!
Links:
Facebook: www.facebook.com/elizabethleewrites
Twitter: www.twitter.com/elwrites
Website: http://elizabethleewrites.blogspot.com
Author Goodreads: http://www.goodreads.com/author/show/6542627.Elizabeth_Lee