~Synopsis~
After a devastating turn of events, seventeen year old Tally Baker is admitted to Mercy Psychiatric Facility where she is diagnosed with Bipolar Disorder. She has come to a place where she honestly believes that her life is over. Her mind tells her that she will never smile or laugh again, that she will never be normal again. It is in this unlikely place that she meets two people, different in every way, yet both critical to helping her realize that she has so much more living to do. Candy, a cantankerous sixty year old Mercy Psychiatric patient, is hell bent on driving everyone as crazy as she is. Candy shows Tally that, regardless of her diagnosis, the ability to push on and live her life to the fullest is her choice and hers alone. In the midst of Tally’s oftentimes humorous, sometimes heart-wrenching, escapades with Candy, a new patient is admitted to Mercy—a Native American woman named Lolotea. Along with this new patient comes a daily visitor, her son, Trey Swift.

At first glance, it is obvious to Tally that he is incredibly handsome and unbelievably caring. But what she learns through her second glance, and many thereafter, is that there is much more to Trey than he ever lets on. It is during these daily visits that Trey and Tally build a friendship far deeper than either of them truly realize. With Trey, Tally feels for the first time since being admitted that someone is looking at her as a person and not as a disease. Trey begins to make it clear that he wants more than friendship, but she knows that she can never give him more. How can she, when she won’t even give him the truth? Tally doesn’t tell Trey that she is a patient at Mercy, and she doesn’t ever plan to. Her plans go up in flames when she finds out that Trey is a new student at her school, the school where her brokenness was found out in the floor of the girl’s bathroom in a pool of her own blood. 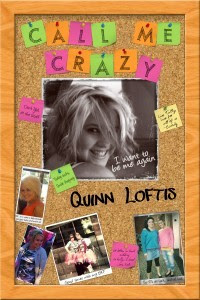 ~Prelude~
When Quinn asked me to read and review Call Me Crazy and I read the synopsis, I didn’t hesitate to say yes. I love young adult contemporary novels and I was very intrigued by this one. I really enjoy reading books dealing with mental illness because they are emotional and intense and I can always feel with the characters.

I really liked Tally and found her to be a very likable character. She is diagnosed with bi-polar and has to spend 3 months in a mental institution in order to learn how to manage it. Her parents are a little cold and distant and that broke my heart a little because she needs a support system to get through this and they don’t want to believe that she has a mental illness. I loved her slightly snarky attitude and some of the comments she made cracked me up. However, I could see that it was a coping mechanism to help her hide the emotional pain that she was feeling inside. She is instantly attracted to Trey but she does a really great job of playing it cool and she is so easily able to banter back and forth with him. As soon as she lied to him about being a patient, I was super anxious every time they interacted because I wasn’t sure how he would react. It was a nail-biting experience.

“It’s then that I realize I’m not broken. Broken implies that I might be able to be fixed. No, I’m shattered beyond repair, beyond hope.”

Trey was a super sweet guy and I really liked him. He was an old soul and he was so mature for his age. He had to be with his mother’s illness and his father dying when he was 12. He is instantly attracted to Tally and there is something that pulls him to her. He can see that she has demons but he has no idea that she is actually a patient. I liked how protective he is of her and when he finds out the truth, it doesn’t even matter to him. I also liked that he wouldn’t give up when Tally tried to push him away and he fought his way back into her life.

“As I’m driving home, flashes of that kiss, of her lips, the way she felt, keep popping up in my mind and I resign myself to the fact that I’m going to have to take another shower before I go to bed, cold would be good, frigid would be better.”

This book also had some really great side characters including Tally’s best friend, Nat, and Candy, her elderly mental patient friend. Nat was super supportive of Tally and never judged her. I loved how caring and protective she was. She wasn’t put off by Tally’s illness and she made sure that Tally knew she supported her. Candy was freaking hilarious and I loved her spirit. She helped Tally make it through her time in the institute and she brought light into a dim situation. Her comments to Trey were so hilarious and I couldn’t help but laugh. She was the comic relief in an intense and emotional plot.

“Did you finally come to your senses and realize that there is something to be said for playing with a cougar?”

Bi-p0lar is a mental illness that I think is more common than most people know because people who suffer from it can still live normal lives as long as they manage it. I have read a few books where a main character suffered from the illness and both characters were the male lead. I liked the change up with this book where the female lead was the character suffering and the male lead was the one who helped her get through it. Trey felt this connection with Tally and fell in love with her as he got to know her. When he found out the truth about her, he never swayed or even questioned being with her. He wanted to be with her and help her find happiness and manage her illness. Tally wanted to let Trey in because he made her happy and she felt normal with him. However, she was so worried about what her illness would do to him that she pushed him away. However, Trey never gave up and he showed Tally that he wasn’t going anywhere and that it was okay to be happy. Amongst all of the anguish and tragedy, they were both able to help each other cope. My only complaint would be that I felt like Trey moved a little too fast and professed his undying love a little too quickly. He was thinking forever after 3 days of knowing her and I am not a fan of insta-love so I didn’t really get on board with that part.

“Sometimes it takes falling to rock bottom, enduring utter devastation in order for us to realize just what we need, what we can’t live without. And the best part about rock bottom is you can only go up from there.”

Overall, I really enjoyed Call Me Crazy and loved the way it could make me laugh one moment and tear up the next. It was very heart felt and real. Tally’s struggle was emotional and hard to watch but it was also endearing to watch her fight to get her life back under control. I think Quinn made a great break into the young adult contemporary genre and I can’t wait to see what she comes up with next.


*An e-copy of this book was provided to me by the author for a fair and honest review. All opinions expressed in this review are my own and unbiased.*