Blog Tour: Living in the Aftermath by K.A. Coleman

I am super excited to have the Living In The Aftermath Tour, hosted by Irresistible Reads Blog Tours,  on my blog today. I can't wait to share my review with you.
To follow the tour and check out the other stops, click on the banner above.

~Synopsis~
At the start of her junior year, Savannah had it all: popularity, money, cheerleading, a boyfriend, and a best friend. Unfortunately, when you have it all, you risk losing everything. After a tragic accident forever changes her life and the lives of her friends, Savannah finds herself faced with a decision to make. She can try to slip back into her old life, flaws and all, or she can try to redefine herself for her last year of high school. Is it even possible that Savannah can change after having everything go her way for 18 years?

Jacob has nothing to lose. He has seen one too many schools and wants nothing more than to graduate, so he can finally stay in one place for more than a year. In fact, Jacob thinks he has every clique and student pegged after switching schools so frequently. When Jacob finds himself face to face with Savannah, he realizes that she doesn't quite fit into one of the high school stereotypes.

In fact, they're both harboring rather big secrets. Maintaining a friendship or any kind of relationship can be akin to balancing on the thinnest of tight ropes. When the rope is made of lies, revenge, and half truths, well, it's only a matter of time before everything and everyone comes crashing down. 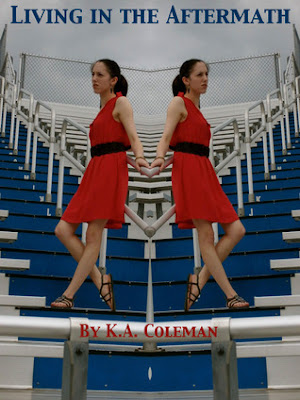 While Holding on and Letting Go was emotional and tragic, Living in the Aftermath was all about healing. When tragedy strikes, you can’t change the course of events, instead you have to live with what has unfolded.

Living in the Aftermath is told from the perspective of Savannah and Jacob. Savannah was a supporting character in Holding On and Letting Go and Jacob is a new student who becomes friends with the group in their senior year. After the tragic events at the end of their junior year, Matt, Emerson, Lexie and Savannah have banded together as a group to help each other heal after all they have endured. However, there are so many emotions involved and they have all been through too much to heal easily. Secrets are revealed and friendships are tested.

I wasn’t really a fan of Savannah in Holding On and Letting Go but I felt like she did change and develop as a character and by the end she wasn’t terrible. My feelings about her didn’t change much in this book and while I think there is definitely a lot more to her from her perspective, she still is not that likable. She is spoiled and selfish and she is kind of a brat. She is definitely the mean girl and while she has changed somewhat and grown a little from the events in her life, she is still a bit self-centered and childish. I don’t feel like she grew as a character or as a person and I was a little disappointed by that. I had hoped that she would greatly improve throughout this book.

“I’m pretty sure the reason at school I am “popular” is that of money, looks, and bullying. What does that say about me? Nothing good, but I still like me.”

Jacob, on the other hand, was an incredible character and I absolutely loved him. He was new to school and made his way into the dysfunctional group that was Matt, Emerson, Savannah and Lexie. He quickly learned about the tragic events that brought them together and he was amazing at respecting their feelings and privacy. He never pried and he became an amazing friend for Savannah. He carried secrets that he shared with the group and trusted them to hold onto. He was probably my favorite character out of all of them because of his loyalty as a friend and his development as a character. He went from a quiet loner to a loyal friend and his journey was incredible.

I liked that this book was a little more upbeat than the first and focused more on healing than loss. It really delved into the topic of moving on and honoring those we have lost. This group of people who were so different before, came together as friends to help each other move on and rebuild. However, I wasn’t a big fan of Savannah’s storyline involving Toby or the plans of revenge that she coerced her friends to help carryout. It was a bit childish and it showed how immature and self-absorbed Savannah was. I also didn’t like Emerson as much in this book either and felt like she was a little too vindictive and harsh. The ending was a bit abrupt and I wish it had a little more closure. Even though there is a third book on the horizon, I felt the ending wasn’t really a cliff hanger but just ended.

“You can’t ever win anything that matters by playing it safe. You play with your heart.”

Overall, Living in the Aftermath was an enjoyable read and I liked continuing on the journey with these characters. I wasn’t as enraptured with the story as I was with Holding On and Letting Go but I look forward to the final book in the series.

I'm not really going to write a biography. Though I am supportive of the high schools and colleges I have attended, it's probably not actually the most interesting stuff about me. I'm going to do a list of five really random things instead for now.

1) I like making lists. It's weird, and I never actually scratch things off of the list.
2) I sing and dance in the car like a maniac.
3) For the first six years of my life, I truly believed a shark lived under my bed. I watched Jaws at too young of an age.
4) Without a doubt, I am a night person. I am enormously grumpy when first woken up in the morning.
5) When I was younger, I read almost every Nancy Drew book, both new and old. I had a notebook, and I would take notes to see if I could figure out who the "bad guy" was before Nancy did. We probably tied.