~Synopsis~
The only thing that 17 year old Barbie Starr wants to do is graduate high school so she and her little brother, Everett, can get out of Alabama. She doesn’t care about the rumors that are spread around about her like wild fire. Rumors are nothing new to her. Sure, maybe she could change her reputation, but why bother. She is leaving Alabama as soon as she can. That is, if she can pass algebra and graduate.

The only thing Dylan Knight would like to do is go through high school unnoticed; he has had enough of the drama that is high school. He took the whole of last summer to bulk-up: finally he is not being called names or being shoved into lockers. He wants to remain on the outside of the circle of constant rumors that surround the so-called popular kids who get all the attention. He would not, however, mind if his long time crush Katie took notice of him.

But it is Barbie who notices Dylan and she offers him a deal he can’t pass up: if he helps her pass algebra, she’ll help him get the girl of his dreams. Dylan agrees, but, as it turns out, nothing is simple when it comes to Barbie. Somehow, she can’t help but draw attention to herself — and to him. Soon Dylan finds himself tossed into the whirlwind of rumors that seem to follow Barbie everywhere. Can he save his reputation and still get the girl of his dreams? Or will Barbie be the one to break through his carefully-built facade? 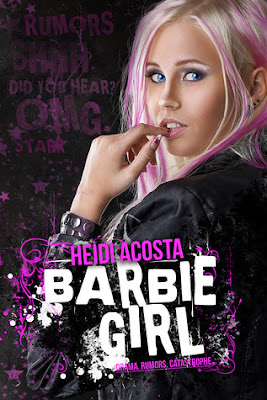 ~Prelude~
This is another book that I had to jump into and quickly read because I signed up for the blog tour of the second book. Honestly, I wasn’t sure what I would think of this book because I can be a “judge a book by the cover” kind of girl and I am not a fan of the cover for this book. However, I was definitely given a slap on the face with this one because it definitely took me by surprise.
~Review~

Barbie Girl was a much more endearing and intense read than I was expecting and I actually enjoyed it much more than I thought I would. There were definitely moments that tugged on my heartstrings and this book gives new meaning to the phrase “don’t judge a book by its cover.”

Barbie is considered the school druggie and whore and she really doesn’t have any friends. Most people avoid her because of her reputation and she doesn’t care what anyone things about her. The only thing she cares about is graduating high school and getting her brother and herself out of town. Dylan is a hot dork who is basically invisible. He is in love with Katie, the school sweetheart, but she doesn’t know he exists. When Barbie needs a tutor to pass math, her and Dylan strike a deal to get her the grade and him the girl. Neither of them expected the feelings that would develop between them or the path this would lead them down but they both come from different worlds and those feelings may not be enough.

“I knew what we had would not, could not be real. It could never last. We are from two different worlds.”

I actually loved Barbie and felt her pain and sadness deep down in my soul. She doesn’t give a shit what anyone thinks of her and she leaves everything out on the table. Nobody knows the real her and everyone starts rumors and jumps to conclusions without getting to know her.  The most important thing to her in the world is her little brother, Everett, and she will do anything to protect him. She has a shitty home life and a deadbeat mother but she is really good at hiding her secrets from people. Even in a small town, nobody really knows the truth. It made me so sad how she let others define who she was and she never tried to prove them wrong or show them that they were.

Dylan is a sweet and respectable guy. However, he sees everything in black and white and that drove me crazy. To him, Katie is the perfect girl and he thinks he in love with her. On the flip side, he sees Barbie as the rebel, troublemaker and wants nothing to do with her. However, Barbie starts to help him see color and it was so funny to watch him battle his feelings for Barbie. Katie is everything he thinks he wants but Barbie makes him question everything. When things go south with Barbie and Dylan immediately starts seeing Katie, I wanted to punch him in the face. He judged Barbie and broke her heart and then toyed with her emotions, which really pissed me off. Despite everything, I couldn’t help liking him, even though he made some dipshit decisions, because he was a really sweet guy deep down.

I also really liked Third, Dylan’s best friend, and Roxie. Third was a super cool guy and he made me laugh with his antics and his mega crush on Barbie. He ended up being a really good friend for her and he became someone she could trust with all of her secrets. Roxie didn’t come along until towards the end but she became a great friend to Barbie when she needed one the most and it was awesome for her to have a girlfriend, which is something she never had. I really despised Katie and her snobbish attitude towards Barbie. She never noticed Dylan until he started hanging around Barbie and suddenly she was interested. She wasted no time in moving in on him and she was a total bitch to Barbie for no reason.

Barbie and Dylan have this amazing chemistry and they are both so different but that’s what makes them perfect for each other. Barbie needs Dylan to help her feel alive and worth more than anyone has. Dylan needs Barbie to open his eyes and see everything clearly. Barbie’s attitude about herself broke my heart because she was never shown true love and it hardened her and made her think she wasn’t worthy of normal and happy. She never thought she was good enough for Dylan and that made so sad. Everything that happened between Barbie and Dylan was heart-wrenching because I so wanted them to get their happy ever after, especially Barbie. She so deserves it. The events that unfolded at the end of the book were so intense and I was hanging on every word and scene. The culmination of Barbie & Dylan’s relationship and Barbie’s broken home was an intense and tragic scene. I definitely felt my heart clench a few times.

“I was not sure it was possible for me to feel any more pain than I did that night. I was wrong.”

Overall, I really liked this book and I was surprised by the intensity of the story and how captivated I was. The writing was actually really well done, even though there were some grammar and spelling errors. I thought the plot flowed really well but the scenes switched without notice or breaks and it sometimes became confusing. Despite the few grammar and formatting issues, this was a great young adult contemporary novel and I moved right into Barbie’s World.

~IPOD Picks~
“Breakaway” by Kelly Clarkson
“Counting Stars” by One Republic
“Never Say Never” by The Fray
Posted by Unknown at 3:00 AM